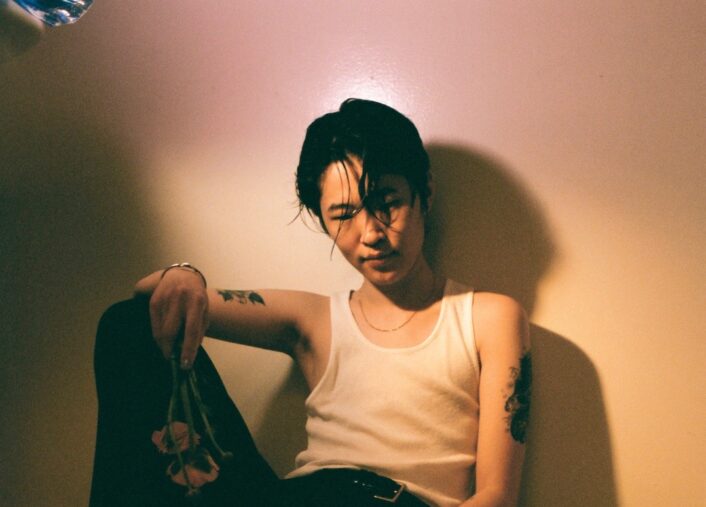 What does it mean to feel pride–to feel love? Not just romantic desire, but an all-encompassinglove built around acceptance and unconditional respect? For 24-year-old indie/alternative artistNoSo, they seek out the answers in their work. The title of their debut albumStay Proud of Meis an entreaty to their past self, as they dauntlessly forge ahead to become the person and artistthey’ve always wanted to be.

If you’re a guitar enthusiast or familiar with the L.A. music scene, you may already know thename Baek Hwong.Born and raised in the Chicago suburbs before moving to California as ateenager, Hwong cut their teeth at the competitive Thornton School of Music at USC, wherethey studied guitar and songwriting and began to develop their own unique playstyle.

After originally pursuing the path of more instrumental players like Tommy Emmanuel, Hwongrealized in college that their writing was quickly manifesting itself in new, more personal ways: inlyrics, arrangements, songs that begged to be sung andfully realized. They began to cultivatean ever-growing collection of demos, a small portion of which would make upStay Proud of Me,their debut album under the name NoSo.

NoSo is shorthand for “North or South?”-a question Hwong often had to face growing up in apredominately white town whenever they mentioned they’re Korean.Hwong’s writing oftenindirectly grapples with the insecurities and frustrations that can arise from the Asian Americanexperience. Their writing feels like a balm for the alienated, like this couplet from the song “IFeel You”: “You feel my lies while my body moves without me/Laughing about it, laughing aboutit.”

Hwong wrote and recorded much of the record alone during quarantine in their bedroom,studying any non-guitar instruments they weren’t as proficient with in order to make it happen.On the fluttery lead single “Suburbia,” one of the first songs written for the LP, they movebetween a heart-rending chorus and diaristic lyrics about golden Oreos and power-walkingmoms with the grace of a seasoned screenwriter, sprinkling in the small but vivid details thatplace you in the heart of the story.

Just as there is no singular Asian American experience, there is no singular LGBTQ experience.Hwong, a queer non-binary person, remembers that the first time they realized they wereattracted to women was when they wrote a romantic song with femme pronouns. They don’tremember ever explicitly coming out in public; from the start, their declaration of themselves tothe world at large has always been through music.

One highlight, “David,” was inspired by a dream where they were trapped in the body of a whiteman: finally the object of desire in the eyes of the girls whose attention they once longed for.“When I woke up, I was emotional, andI couldn’t figure out why,” Hwong explains. “Was itbecause this was still something I wanted? Or was it because I was genuinely disappointed inmyself for even having those feelings? I think it was both.”

Album opener “Parasites” was written in the wake of Hwong’s recovery from top surgery. Atop abed of lush electric guitar and organ, they celebrate a newfound physical and emotionalfreedom: “The parasites, removed from your skin/And so lovely, lovely to meet you again/Solovely to be born again.” On another standout track, “Feeling Like a Woman Lately,” they explore the other side, the “emotional fluctuations” of gender. As they write: “The line betweenempowerment and dysphoria is very thin at times.”

In an effort to escape themselves during the writingprocess, Hwong also occasionally turned tothe solace of fantasy. Screenplays they wrote during quarantine informed the lyrics, allowingthem to inhabit the characters and plotlines from worlds other than their own as they pouredthemselves into fleshing out the details. You can hear this clearly in the cinematic verses of“Honey Understand;” a brooding stomp with a cathartic chorus.

The yearning of NoSo’s music is led by their wistful guitar playing, from the circular riffs on “IFeel You” to the glassy plucks scattered throughout “Feeling Like a Woman Lately.” The palm-muted arpeggios that open “Man Who Loves You” give way to a jangly pop ballad, perfect forclosing out a teen romance movie. The power of these songs stems from NoSo’s universaltenderness;a singular perspective to affect and assuage the hearts of many.

Stay Proud of Meis a deeply earnest coming-of-age album, a nuanced introduction to NoSo’suniverse and Hwong’s rapidly expanding musical abilities. The marriage of their lyrics andcaptivating guitar performance feels magical, as if Noso can open up portals to fantastic newrealms, guided by an emotional honesty that breaks you down in one moment and fills you withjoy in the next.