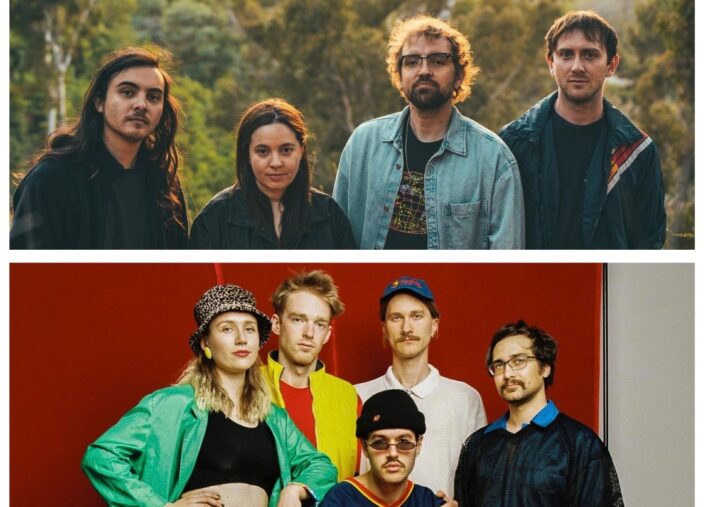 “Come along and wake up on the way,” sings Goon frontman Kenny Becker, “orange shapes arrange and change again/quiet Isaac in a mild dream.” The lyric evokes the hazy dreamscape spaces occupied by the band’s new album, Hour of Green Evening. It describes an in-between
time, the pre-dawn quiet over a still-sleeping suburban neighborhood, insects buzzing and the creatures just stirring awake. The yearning of kids in their beds for the world beyond, of being stuck just on the precipice of everything. The sun soon to rise, the whole world about to be in bloom.

Goon began as Becker’s Bandcamp solo project in 2015. At a friend’s encouragement, Becker compiled the best of his tracks and released them as an EP, 2016’s Dusk of Punk. He recruited bandmates from his college buddies and released a second EP, all the while working on the
band’s first full-length, 2019’s Heaven is Humming on Partisan Records, followed by the self-released Paint By Numbers 1, a collection of his mid-pandemic home recordings. After several band members departed for other jobs, cities, and life experiences, Becker recruited a
new band—Andy Polito on drums, Dillon Peralta on guitar, and Tamara Simons on bass—and set about recording a second LP, Hour of Green Evening, in Tropico Beauty studio in Glendale, California, working with producer and engineer Phil Hartunian. Alex Fischel from Spoon also
sat in on the session, providing piano and keyboards.

“We tracked ten days in the studio to start, and ended up working a total of twenty,” says Becker. “For the first six or seven days we did it live, the four of us in the room, with Phil in the control booth, tracking straight to two-inch tape. It was isolated deep pandemic vibes. We felt like we had enough days booked away from the world to really take our time.”

The evolution of Goon has come to full fruition on Hour of Green Evening. It’s the band’s most complete statement, engaging all aspects of their sound to stunning effect. The record conjures the nighttime suburban world of Becker’s youth, a mix of concrete and cookie-cutter homes with the lush beauty of California landscapes. The album thrums with mystery, with the half-remembered past hazy as dreams, the mixed sense of comfort and longing for freedom so essential to youth. The world of Hour of Green Evening is lush and strange, populated by people dreaming, sleeping and waking, existing in that in-between space of the nighttime world. Plant references abound, the “hydrangea lawns” of “Last Light On,” the “eucalyptus wall” of “Wavy Maze,” the oleander in the hypnotic “Lyra,” all swirling together in an endless suburban gloaming.

The dew-soaked morning maw of “Angelnumber 1210” blurs the space between waking and dreaming as distorted guitars cut through the atmospherics. “In a past life you softly slept through waking hours” sings Becker, “and in the boughs beams of sound play a welcoming.” It’s the merging of worlds, the divine suggestion of angel numbers leading the earth-bound narrator towards trust, growth, and progress, even across various lives and timelines.

The light, rangy “Ochre” is a deceptively dark song. Again, Becker calls to the imagery of the half-asleep times, singing, “I wandered out of bed/cuz there’s a firing line in my head/and it worked for a minute/opened my evil eye.” The calmness of the music and the ease of Becker’s delivery belies the anxiety at the core of the song, with images of fire, destruction, and paindrifting by, accented by Alex Fischel’s manic piano flourishes.

Inspired by the innovative studio pop of groups like Stereolab and Steely Dan; Bridal Party uniquely reinterprets and combines the hook-forward songwriting of artists like Tops and Men I Trust with the emotional bombast of Jay Som and Japanese Breakfast, threading it all together with a diaristic narrative realism. Compassionately characterized by lead vocalist Suzannah Raudaschl’s lithe vocal, these songs carry a danceable energy that winnows the commonplace for its most intimate detail.

Their driving work ethic has sent them on tour across Canada and the USA multiple times and landed them coveted slots in festivals Sled Island, Pop! Montreal, and Rifflandia.